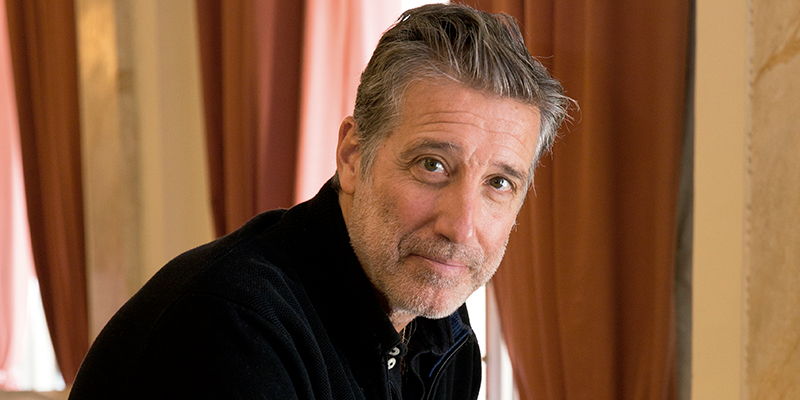 A few days ago, your foundation, Fundación MAPFRE, declared Emilio Aragón this year’s winner of the José Manuel Martínez Lifetime Achievement Award. This is in recognition of “the humanitarian support he has constantly offered social organizations combating hunger and poverty, and promoting inclusive education.” Because, throughout his career, “he has proved capable of conveying values such as generosity, humility and a capacity for hard work.”

Many of these values were passed down to you by your family, with whom you had a nomadic youth. “Until I was 14, my sisters, my parents and I lived wherever my father found work. And we all headed off with our luggage in tow.” From his native Cuba to the United States, Colombia, Argentina or Puerto Rico. Indeed, he has dedicated his latest album – La vuelta al mundo [Around the World], released under the name Bebo San Juan – to two of these countries. The first name is the diminutive his grandchildren call him. And the surname is the capital of Puerto Rico.

It is also a homage to your mother, isn’t it?
It was actually a gift I owed my mother and my wife. This record wasn’t going to be published. That’s why there are quite a few nods to my family. I talk about my family, my father, my wife and music. Even when I’m doing other things in my life, music is always there waiting for me. The fact is that, between my children, my sisters, my wife and office colleagues, they were all getting at me and I ended up putting the record out.

“I believe that, in this society, we should all pull together.”

First and foremost, you are a musician…
That’s what I studied and trained to be. Then life began taking me down other roads, to other places and I just opened other doors. Although I’d like to think that I’m a storyteller. There are many ways to do this: with a song, a TV series, a movie, a book…

Indeed, because you are a screenwriter, director, singer, orchestra conductor, writer, actor…
Yes, I do all those things, but badly. Even though it may have been poor, I’ve done a bit of radio, theater, comedy, music and cinema. I did them in order to be able to experience different things. Now, for example, I’d love to be able to draw and paint. Within a few years, if I have the chance and time allows, I’d really like to learn. All in due time.

You would have been really happy in the Renaissance…
In fact, many of my fellow musicians or artists also master other disciplines. There are many people around me with loads of interests too, longing to do other things. What is true is that the Renaissance artists would really enjoy the present day with so much technology, so many possibilities for giving expression to a song or a work of art. What’s more, these are truly interesting times with the technology available: I’m convinced that cinema is going to evolve toward something different from what we know now. Even the way we experience the theater is going to change. I believe new times are coming and I hope we’ll have the good fortune to be able to know and enjoy them.

“Even when I’m doing other things in my life, music is always there waiting for me.”

Despite being such a busy man, you have been collaborating for over 20 years with Action Against Hunger. Why the fight to end hunger?
Nutrition is the building block for fulfilling any other human right such as education, gender equality, health, etc. A malnourished child will never learn as well in school as a healthy one and, as an adult, will never produce as much as a healthy child, thus perpetuating the cycle of poverty and hunger.

You are also a member of ‘Dales la palabra’, focusing on children with hearing problems…

I believe that, in this society, we should all pull together. At the present time, with so many outstanding causes, if I can play my part, just do my bit, if my little contribution can be of some help… well, all the better. I’m not trying to be any more than another piece in the puzzle.