BLOCKCHAIN the technology that aims to change the world 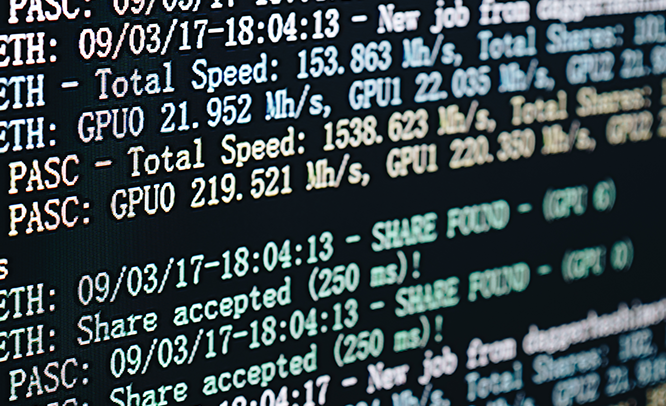 The potential of this technology which underpins bitcoin and most other cryptocurrencies is so great that experts claim it will transform relationships and will help organizations to capture talent in the new Internet of value. Still in the commercial development phase, they predict it will bring about a truly citizencentric revolution if it finally manages to meet the expectations it has generated in the last decade.

Try it out: ask yourself when was the last time you heard of the Blockchain; sound out your friends; consult the archives and the website of the prestigious MIT (Massachusetts Institute of Technology); turn to Google and you will reach the conclusion that it sounds like the latest buzzword, but little else. Despite its omnipresence, it is hard to explain how this technological umbrella actually works – although everyone is talking about it within organizations – and, to a large degree, even the experts admit they know little.

This is only natural. To fully understand the system, the specialists explain that it is necessary to have the level of mathematics used in astrophysics, knowledge of technology and network architecture, an understanding of cryptography and, on top of all this, knowledge of economics, and prior theoretical training on its fundamental concepts. Faced with the difficulty of fulfilling all these criteria, which will make most people give up, in this article we will outline the philosophy surrounding the Blockchain and how it may help change the world.

Every day, corporations, entrepreneurs and governments invest millions in order to develop this technology and thus be well placed and ready for what many have called the next industrial revolution: the Internet of value, an expression that defines the next evolutionary phase of the Web, allowing value to be shared in a decentralized manner, in other words, without intermediaries, which is precisely what the Blockchain makes possible.

“IN THE FUTURE THE WORLD COULD BE 7,000 MILLION NETWORK-CONNECTED NODES, WITHOUT INTERMEDIARIES”
Alex Preukschat, coordinator of Blockchain España

Created in 2009 as the backbone of bitcoin, the world’s most popular cryptocurrency, the name refers to the series of linked ‘blocks’ or transactions. But the technology that underpinned the launch of the unregulated virtual currency par excellence can prove useful for a great deal more. It has the potential to do away with all those intermediaries in other services and business processes, if this infrastructure is finally accepted by the industry.

In an essentially speculative world, Blockchain provokes the same reaction as all other major technological disruptions: it leads to a futuristic discourse, aimed at laying down the shape of things to come and the applications it will make possible; and the lure of a business that has seen 4.5 billion dollars invested this year in an ecosystem which has already spawned some five hundred startups. But the Blockchain technology’s maturity level remains to be seen and that wait could lead to disappointment.

The challenge of predicting its evolution

Alex Preukschat, node coordinator at Blockchain España and author of the book Blockchain, the industrial revolution of the Internet, refers to the Internet – and the challenge it posed in 1992 for those trying to forecast its evolution – to explain what may occur in the future. “It was a real challenge to visualize what it has now become: firstly, email; then, the chats; next, the social networks; phone calls at zero cost; and, now, being able to do your shopping on Amazon.”

“There were some visionaries who, way back in the 1970s, had already predicted the world we know today. But, basically, what one could talk about then was technology, the TCP/IP protocol, the purely technical side,” he recalls to explain the phase in which we now find ourselves with Blockchain.

These scenarios bring with them an enormous challenge, as the technology may not prove capable of fulfilling the expectations generated in the general public and, for this or other reasons, may fail. For example, Joan Cuscó, Technological Innovation assistant manager at MAPFRE, warns us that the time period being forecast to see the massive impact of machine learning and artificial intelligence ranges from five to ten years.

Like the Internet, Blockchain cannot be imagined: it is an architecture, a design, not a space. But not any old space, since it was forged as the peer-to-peer network capable of reflecting, as in an enormous ledger, a chain of all financial transactions using virtual currencies (such as Bitcoin and Ether), duly associated with the value reference par excellence – money.

What is Blockchain? It is a large distributed database held on servers throughout the world, which allows information on value to be exchanged (securities, data, digital assets of any kind) and transactions to be validated in a decentralized manner – in other words, without the involvement of any government or central bank – between participants who do not know each other, in a highly secure manner, as it cannot be altered.

“Blockchain is a decentralized consensus machine,” is how Preukschat sums it up. He recalls that it solved the double spending problem that scientists around the world had spent years researching, as it prevents paying twice with the same coin, taking as an example the bank, which we all know.

“In a centralized world, it’s simple. If you have deposited 100 euros and spend 80, there is a consensus that there are now 20. This is because the bank says so and we trust it, because no one thinks there could be any manipulation of its database, as well as there being an underlying regulatory authority,” he explains.

To understand this better, Blockchain is very similar to BitTorrent (a system for downloading audiovisual and software files), which allows clients around the world to download and share files chosen from a massive database where nobody controls the contents or their distribution.

In the new Internet of value, with this decentralized system using Blockchain technology, no one acts as the sole
authoritative voice; consensus is achieved through a validation system which enables a whole series of computers (hereinafter referred to as nodes) to agree on the authenticity of an account, without depending on a central authority. 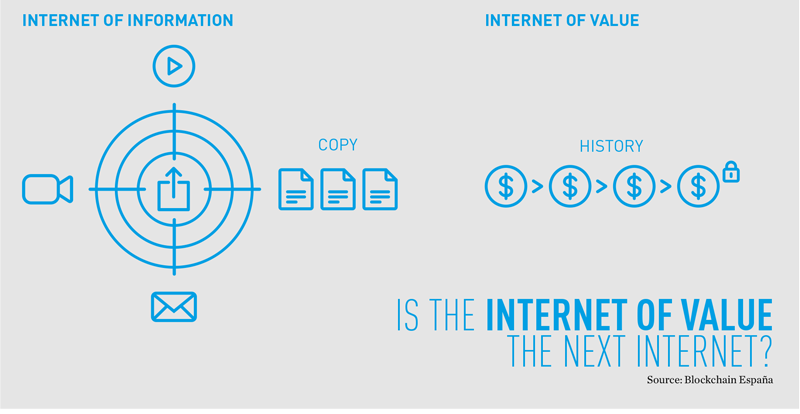 The ability of this architecture to preserve all kinds of valuable information has also sparked the interest of numerous entrepreneurs around the world and led to the creation of digital notary, electronic signature, and patent and contract registration systems, among many other applications.

One of the greatest assets of Blockchain, where everything leaves its mark, is precisely its level of traceability. In a world in which transparency, trust and ethics have become the mainstays of the most advanced states, this way of understanding distribution, in which the participants become part of a network on truly equal terms, offers up a wealth of opportunities.

For convenience, Blockchain is used as a generic term in the market, but the reality is that there is not one single chain of blocks, but rather as many as are needed: anyone with five computers and the necessary knowledge can create one at practically zero cost.

Its DNA differs greatly depending on whether they are public or private blockchains, as they are mutually incompatible. While, in the latter, the participants are identified, have certain permissions and focus on optimizing processes and increasing profitability, the former are associated with total disruption, those eager to reinvent the world.

“MAPFRE IS EXPLORING THE USES AND IMPACTS OF NEW TECHNOLOGIES, SUCH AS BLOCKCHAIN, WHICH WILL BE FUNDAMENTAL IN THE DIGITAL WORLD”
Josep Celaya, corporate Innovation manager

There are also countless spheres for their use, ranging from the digital identification of refugees to the dispatch of humanitarian aid, electronic voting, the fight against corruption or the eradication of “blood diamonds” from conflict areas.

The other side of the coin, and what raises the greatest doubts, is the scalability issue surrounding this technology, and the current length of its transaction and verification times. The absence of unified standards between the different blockchains – whether public or private – is seen as a weakness of the system, as it complicates the dialog between chains.

In the private sphere, the insurance industry is one of the sectors in which Blockchain will have the greatest impact, after banking. The technology will impact mainly on two levels:

• With respect to the use of smart contracts, a component element of the Blockchain technology which allows for certain services to be automated. In this regard, operations areas have started out by automating payments in cases where the incident giving rise to entitlement to some benefit is unequivocal and irrefutable, and where the conditions under which a benefit is to be paid out are clear and obvious, such as the cancellation of a flight in travel insurance. “These are very clearly quick wins”, Cuscó states.

• With regard to the interoperation between entities, given the aforementioned high level of traceability, with customers, insurers, dealers and the traffic authorities exchanging information within the same blockchain, for example, in the process of preparing documentation and coverage for a car after the manufacturer delivers it.

Currently undergoing a digital transformation process, MAPFRE is following Blockchain closely, as part of its firm commitment to innovation. “We are exploring the uses and impacts of new technologies, such as Blockchain, which will be fundamental in the digital world. The possibility of drawing up smart contracts, for example, will lead to an improved relationship between digital organizations, lowering the cost of transactions,” explains Josep Celaya, corporate Innovation manager. 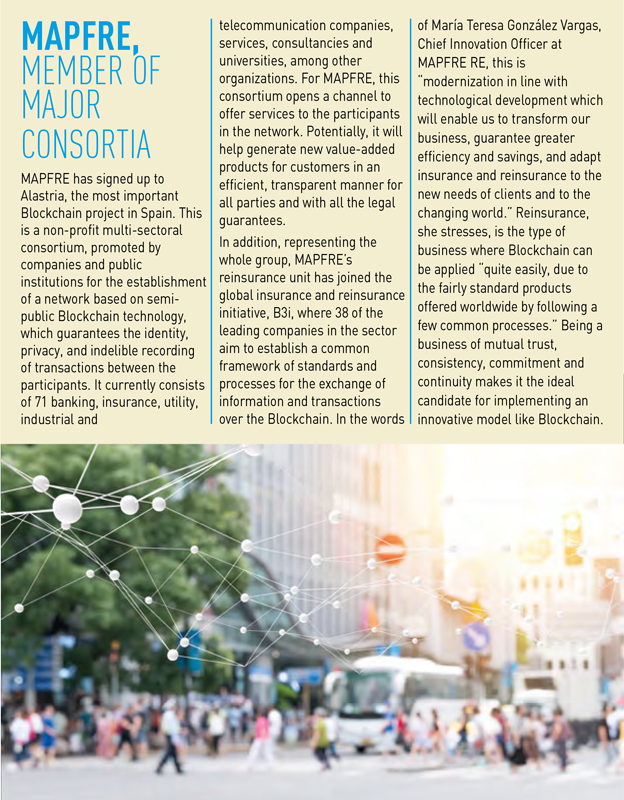 Preukschat affirms that all models of the future are ways of organizing human relationships and, when new formulas arise, it is normal that they generate fear, but they allow for progress. “Over 200 years a model of centralized hierarchical organization has been created” he explains, that which companies adopted at the start of the industrial revolution, based on that of the army. Many people behind public blockchains question the injustice of a centralized, inequitable overlord, impacting on the ecosystem, and are working within the Blockchain to explore other organizational formats. The creators of the Ethereum project, which allows Blockchain to become a computing platform thanks to smart contracts, were seeking a decentralized economy. Now the investment in protocols has been democratized, due to speculative interest, “but this allows for innovation at an unprecedented level,” this expert admits, and companies are looking at ways that, at first sight, could prove contrary to their interests. Something so hopeful as believing that bringing loads of talent together with a lot of investment will elicit some macro-project in the near future.