A decade with Rafa 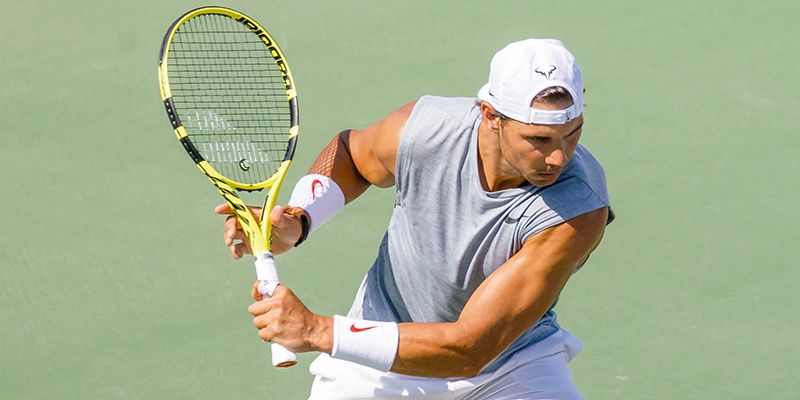 “Personally, I can only thank everyone,” were the opening words from Rafa Nadal to the MAPFRE employees last May, for the celebration marking the 10th anniversary of his commitment to our company. The event took place in the company’s innovation laboratory – insur_space – in Madrid, in the format of an interview open to the whole world. The tennis player was thus able to get closer to the people who make up our company and the thousands of followers on Twitter determined not to miss the interview.

Ten years of challenges. Of transformation. Of leadership. Rafa Nadal, the best Spanish tennis player of all time, has spent a decade with MAPFRE and we celebrated this milestone with an informal, accessible interview open to our employees and Twitter followers from insur_space, the new area MAPFRE set up as a startup accelerator in the insurtech environment.

Over these ten years MAPFRE has been accompanying the player in his professional career, Rafa has demonstrated his tremendous ability to constantly excel and innovate, managing to win no less than 18 Grand Slam tournaments, the most important professional tennis titles that exist.

Although, if something touched our hearts, it was his latest victory. Paris, clay court and Rafa Nadal. Without skipping a beat, he lifted the Roland Garros trophy for the twelfth time. Twelve times champion, twelve times “King of Clay”, because that is how this player is: he never gives up when he has to give his all, just like our company.

Live with our Chairman and CEO

The celebratory event began with a live connection to the MAPFRE Chairman and CEO, Antonio Huertas, who posed the question “How has your experience been over these ten years together?” This initiated a conversation where the exchange of ideas on this decade of collaboration was marked by the spirit of overcoming all hurdles, transformation and innovative capacity. All values that prove indispensable when competing for leadership and progressing at the same rate as the new digital environment.

And replies for all

This warmhearted meeting with Nadal was streamed live on Twitter, where thousands of fans from all over the world, in addition to the 70 MAPFRE employees attending the event, were able to ask the tennis player about innumerable aspects of his professional and personal life. José Antonio Arias, group chief Innovation officer, outlined MAPFRE’s commitment to innovation, before moving on to an extensive interview led by Ignacio Baeza, MAPFRE vice chairman, together with Manu Carreño, the famous Spanish sports journalist who has narrated such historic sporting events as the 2010 Soccer World Cup.

Among the questions which arose during the event, the most noteworthy issues were preparing the new generations of sportsmen and women, power and speed, training, sustainability and attitude. Rafa Nadal epitomizes the values of his sports discipline, tennis at the maximum level, as well as the values intrinsic to MAPFRE itself, namely integrity, solvency, vocation for service, innovation for leadership and a committed team. The tennis player thanked the company for all the years it has been supporting tennis and truly appreciated the affection and support received throughout this time together. As for the MAPFRE vice chairman, he underscored Rafa’s struggle at the toughest moments of his career with this simple, yet concise, phrase: “We always knew you were going to return.” And what a return!

When asked if he had missed out on anything in his youth, having devoted everything to tennis, without batting an eyelid he replied “nothing”. This tells us a lot about Rafa’s commitment to this sport. He was also asked to comment which victory stands out the most and he picked the historic Wimbledon final in 2008 against Roger Federer, the longest final ever played in this championship.

As a parting shot, Nadal stressed that “the basis of sport is striving to do your very best with enthusiasm and passion” because, otherwise, “it’s not worth it.” All of us who make up the MAPFRE family wish to thank Rafa for these years demonstrating the confidence and personal values needed to stand out in any professional field. Keep going, Rafa! You transform MAPFRE!