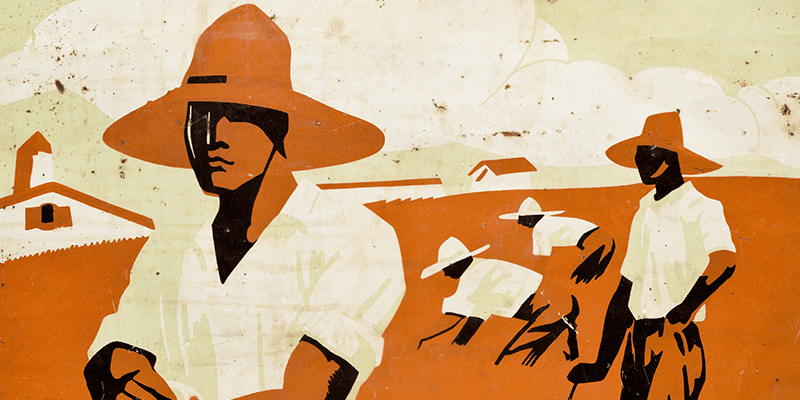 Spain’s Combined Agricultural Insurance Law is considered worldwide one of the best and most efficient of its kind. Fundación MAPFRE recently celebrated the 40th anniversary of this regulation which, for the first time, enabled farmers to be protected from the consequences of catastrophic events. To mark the event, it published a guide to inform on the potential hazards that can so easily hit farming operations.

December 27, 2018 marked the 40th anniversary of the Combined Agricultural Insurance Law In Spain. When it was approved by the Senate in 1978, the then Minister of Agriculture, Jaime Lamo de Espinosa, stated it was cause for celebration. Finally, there was a law that “served to protect farmers from the consequences of catastrophic events.”

A question of need led to this system being designed over 40 years ago. Since then, its initial format has evolved to provide coverage against any potential hazard for all crops and livestock and aquaculture species. As emphasized by Antonio Huertas, MAPFRE Chairman and CEO, the law today “remains a stable legal framework which allows for the development of a sector that is of prime importance in a country like ours, where the privileged climate makes these farming operations truly essential to the food chain.” .

A guaranteed income for farmers and stockbreeders

Jaime Lamo de Espinosa, one of those who participated in the drafting, debate, approval and implementation of this important agricultural regulation, recently pointed out that “he knows no politician or economist who, when dealing with agriculture, does not maintain that the crucial issue is a guaranteed income, this being understood as any policy that aims to ensure farmers have a minimum wage.” The former Minister of Agriculture and Fisheries not only underscored the fact that this regulation is considered one of the best and most efficient in the world, but also that it brings numerous benefits, such as affording farmers income security, cushioning the impact of a catastrophic harvest, and serving as an important savings formula for part of the rural world. Moreover, it protects farmers’ investments, improves their position in relation to agricultural credit, and encourages them to adopt attitudes favorable to the cooperative movement in general. “Insurance is therefore an element of stability, and agricultural insurance an element of agricultural stability.”

For the acting Spanish Minister of Agriculture, Fisheries and Food, Luis Planas, the Spanish agricultural insurance model has managed to evolve over these 40 years, progressively adapting to meet the needs of the producers.

Increasing current insurance levels, adapting existing products to the effects of global warming and climate change in general, digitizing all processes right from purchase up to damage appraisal, and enhancing the effectiveness of the relationship with our policyholders are just some of the challenges facing the sector. In his speech, the MAPFRE Chairman and CEO supported “not just the preservation of nature in the rural environment, but also the creation of future value, fostering transformation and modernity, pushing all the institutions to accelerate the digitization needed to stabilize the population and grant viability to projects. Innovation cannot be something for major cities alone; our challenge is to make it universal and take it everywhere we need life to continue.”

Guide for managing and minimizing risks

In order to provide straightforward, clear information on the possible hazards a farming operation may have to face, Fundación MAPFRE has published a Guide to Protect Agricultural Enterprises in Spain. It also provides guidance to companies in the crop and livestock sectors regarding adequate risk management and proposes possible alternatives and solutions for mitigating or transferring risks to a third party. In this sense, the publication demonstrates that, thanks to the combined agricultural insurance, a farmer’s crops and animals can be adequately protected from harsh weather conditions, accidents and diseases.

It also offers information on the risks faced by companies in the agri-food industrial sector — a sector whose sales represent 20.5 percent of the whole industrial complex; which aspects should be considered when taking out a policy; and what to do in the event of drought or hail.

Ten keys to the protection of agricultural enterprises 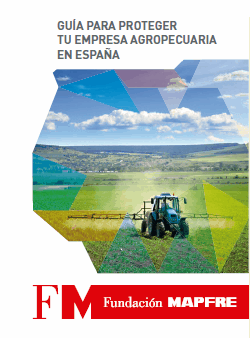 MAPFRE is the leading insurer in the rural environment in Spain with premium revenue in excess of 1.5 billion euros. Not only does it insure crops and productions through Agroseguro, but it also protects their installed capacity against all manner of risks.

Its proximity and sensitivity to farmers’ needs was built up over a long period of time in its specific company, MAPFRE AGROPECUARIA, now a part of MAPFRE ESPAÑA. But, it is also evident in its foundation’s activity, which, among other activities, includes boosting true innovation, social innovation that contributes to the inclusive development of societies. This is the origin of the Award for the Best Initiative in the Agricultural Sector which Fundación MAPFRE launched for the first time in 2018. The aim is to recognize those initiatives that stand out for their innovative nature, breaking molds and introducing new ways of producing, marketing and transforming, all within a framework of preservation of the environment, sustainability and job creation, and which can finally have their own risk management plan or program.

In its first edition, AGRINDUS, one of the largest milk-producing companies in Brazil, received this award for its innovative production system for milk that is easier to digest for people who have some degree of intolerance to cow’s milk. It achieves this by ensuring that its customers consume topquality products of natural origin and that its cows receive the best care possible, while promoting environmental sustainability in every action undertaken in the project. In addition, over the last 50 years, AGRINDUS has contributed to the generation of employment, avoiding the rural exodus and enhancing society, with regular donations of its products to local nursing homes and day-care centers, as well as to the Food Bank in São Paulo.

Did you know that?