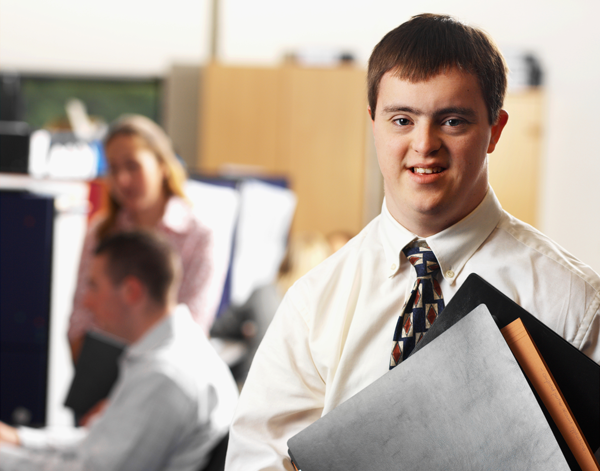 In recent years, the lack of employment has become the number one concern for citizens. But, for some population groups, the difficulty of finding a job is not a new problem. With its Social Employment Program, Fundación MAPFRE is taking care of them.

Lack of experience and contacts, as well as the excess supply of workers makes securing employment a truly difficult mission. There is no doubt that the Internet has become an ally for job applicants, given the volume of information and immediacy it offers, and the use of platforms such as LinkedIn streamlines the process of contacting companies that may be interested in hiring them. And yet, despite all this, it is not an easy task. For this reason, Fundación MAPFRE’s Social Employment Program proposes solutions that help bridge that huge gap separating an unemployed person from companies that need to recruit workers. A gap which, for example, in the case of people with some disability, can become an abyss.

According to data from the ILO (International Labor Organization), there are approximately one billion people with a disability around the world. Some 80 percent of them are of working age, but most cannot find a decent job, even more so in the case of women. In order to incorporate these people into the labor market, what is needed are specific policies to encourage their recruitment. Therefore, programs and tools such as those offered by Fundación MAPFRE are most welcome.

In 2010, with a view to offering people with some intellectual disability or mental illness the possibility of internships in companies, and the chance of later getting a job there, the labor integration program Juntos Somos Capaces [Together We Can] was launched.

Present in practically the whole of Spain, it has set the benchmark nationwide for programs designed to incorporate people with intellectual disabilities and/ or mental illness into the workplace

In its first few years in existence, the program has facilitated the employment of more than 2,800 people with intellectual disabilities and/or mental illness, and the training of 2,506 others. Moreover, it has attracted over 2,400 job offers and put forward more than 5,000 candidates, all thanks to the collaboration of over 560 social enterprises and more than 180 employers’ organizations, having managed to sign up 4,300 companies to the program. In addition, 119 agreements have been signed with town councils, and over 14 regional governments are collaborating.

To achieve such spectacular results, Fundación MAPFRE has reached agreements and made contact with numerous associations, companies, labor unions, non-governmental organizations, education centers and the public administrations. “We work within a network formed with disability social enterprises, the local employers’ organizations in each area, and those companies wishing to incorporate talented people with disabilities into their workforce. We can also count on the commitment and support of local administrations, as a key element in this collaborative work,” says Daniel Restrepo, manager of the Social Action Area at Fundación MAPFRE. The aim is to engage all of these actors and make them the driving force behind the transformation of society in terms of equality and social cohesion.

The figures clearly highlight the need to continue striving to improve this situation. According to the INE (Spanish National Statistics Institute), 70 percent of people with disabilities are classified as inactive. And of the 30 percent who are active (i.e. seeking a job), 83 percent are unemployed. Together We Can acts as a facilitator and intermediary platform between the business sector and associations that represent and fight for the rights of these people.

“Together We Can is not only important because it works with a particularly vulnerable group, but also because employment is the best tool for integration. The idea is to give these people the opportunity to demonstrate their abilities and skills, as worthy additions to the human capital of the company they join,” Restrepo points out.

Fundación MAPFRE stresses the fact that diversity adds value to society and also to companies. Under this premise, the integration of the most vulnerable groups depends, to a large degree, on eliminating a number of barriers that are often “more in people’s minds than in the real world”, the head of the Social Action Area adds. We are all different, we have different capabilities and complementary values to contribute. 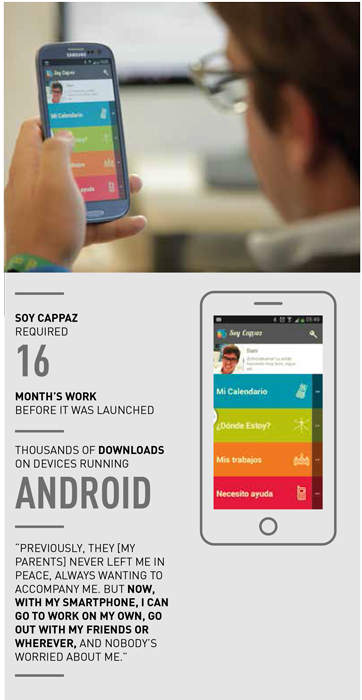 We are used to speaking about the misuse of the new technologies, but there is not enough talk about their ability to facilitate contacting others and, what’s more, to integrate into society those who find it most difficult, as is the case of people with some intellectual disability or mental illness.

Soy Cappaz, the mobile application created by Fundación MAPFRE and the Gmp Foundation to help them in their development as individuals, is a fine example. This software empowers and enables users to tackle everyday tasks in their family, social and labor spheres. As Daniel, the protagonist of the Soy Cappaz promotional video, tells us, “previously, they [my parents] never left me in peace, always wanting to accompany me. But now, with my smartphone, I can go to work on my own, go out with my friends or wherever, and nobody’s worried about me.”

As José Francisco Fernández, director of the Gmp Foundation, explains: “There were some parents who told us that they were totally in favor of encouraging their children to be independent. They said they let them go to the special employment center or workplace on their own, but, as soon as they left the house, could not resist the temptation of getting in the car to follow them and see whether they actually reached their destination.”

Soy Cappaz required 16 months to create and, since its launch in October 2015, has been downloaded three thousand times on devices running Android, the operating system for which it was designed. Most of these downloads are in Spain, although, as from 2016, numbers have been increasing in the rest of the world, as it can also be installed on smartphones in a further 20 countries, in English or in Spanish, according to the language of the device, regardless of the country you are in.

As pointed out by María Soledad Cisternas Reyes, United Nations Special Envoy on Disability and Accessibility “technology is not a luxury for people with disabilities, but rather a necessity.”

Thanks to the Employment Aids granted annually, over the last five years more than 2,376 people have been able to fulfill their quest for work. This means that the same number of people over the age of 18 looking for work have left the ranks of the unemployed. Each of the grants, with a duration of nine months, is for a maximum amount of 500 euros each month for full-time contracts, and 300 euros each month for contracts on a halfday basis.

Students are likewise envisaged under the terms of this program. The project “Descubre la FP” [Discover VT], promoted by Atresmedia Foundation and Fundación MAPFRE, seeks to publicize this specific training, help to promote it and improve its quality, thus boosting the employability of our youngsters. In the 2016-17 course, close to 800,000 pupils opted for vocational training but, despite this, many young people are still unaware of all the options this alternative has to offer.