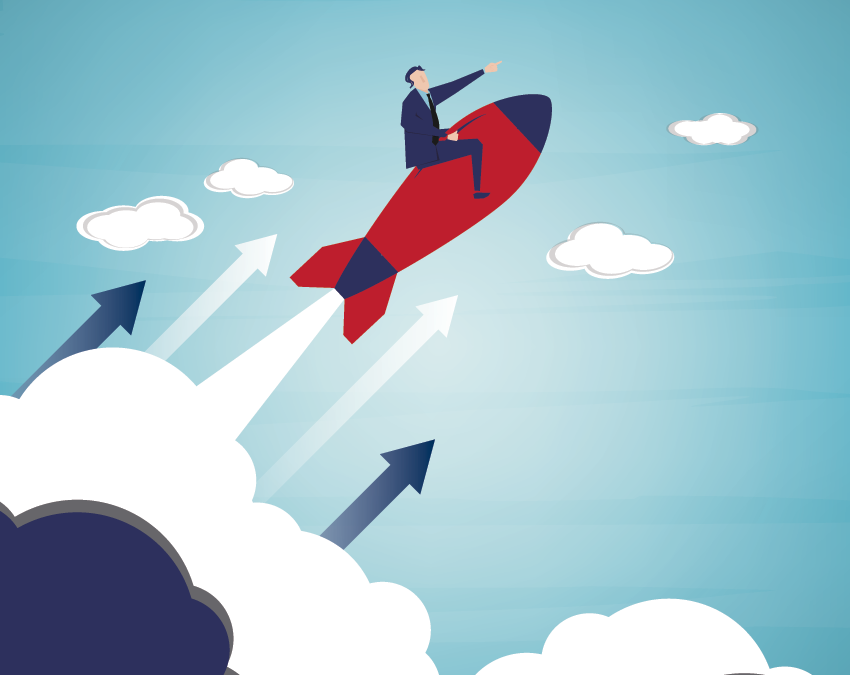 The Outlook report from MAPFRE Economic Research analyzes the global economic situation and that in different parts of the world, paying special attention to the performance of the insurance market.

MAPFRE Economic Research recently presented an updated version of its report Industry and Economic Outlook 2017, a quarterly study that analyzes global economic prospects and those of the insurance industry.

According to the report, global growth during 2017 will be close to 3.1 percent, which represents a slight acceleration with respect to the previous year, but still far removed from the figures prior to the global crisis.
Economic activity during 2017 will rely on the enhanced performance of the developed markets, the growth of China and greater than anticipated resilience in the emerging markets, which could enjoy 4.6 percent growth, compared to the close to 1.9 percent expected in developed markets.

For Spain, the report forecasts an easing of growth, with an increase of nearly 2.5 percent during 2017, far from the maximum recorded in previous years. A slowdown in private consumption is expected – as wages are expected to be outstripped by inflation – as well as in the public sector. This decrease will be partly offset by greater investment activity, particularly in the residential sector.

Forecasts for the USA point to a growth rate of 2.3 percent in 2017, as a result of less dynamism in real disposable income, caused by the upsurge in inflation, as well as moderate wage growth. Greater risks of a downturn are detected for this country in the report’s forecasts, given the delay in the Trump Administration’s economic policy taking shape. Moreover, at the financial level, there is the possibility that the Federal Reserve will finally raise interest rates faster than expected.

The growth forecasts for the Eurozone are close to 1.5 percent for 2017 and 2018, as a result of a better environment for business investment and global demand.

Turkey’s economy is expected to continue its gradual adjustment, registering a greater deceleration of GDP, reaching 2.3 percent in 2017. This behavior will be due to the slowdown in domestic demand, which boosted growth in 2016. Investment will also experience a downturn.

In Mexico, growth is expected to be weak throughout 2017 (less than two percent), with high risks of a downswing. Private consumption will lose momentum as monetary policy is tightened and real disposable income is eroded due to inflation. Investment and the external sector will detract from growth, as will the political uncertainty which undermines both corporate and consumer expectations.

In Brazil, with its currently extremely weak performance and poor prospects for recovery, its GDP growth in 2017 will be close to zero. Inflation will remain high, but the Central Bank will cut interest rates aggressively in 2017. The recovery will depend on institutional and political credibility, now greatly undermined, but key to halting the worsening risk premium and the depreciation of the Real.

Finally, the Chinese economy, which began 2017 with robust growth, will slowly converge toward more moderate rates due to the impact of the country’s economic policy, finally reaching 6.3 percent. There will be a continuance of the risks stemming from the relationship between the imbalances of the residential sector, excess credit and financial stability, favored by the government over any growth target. 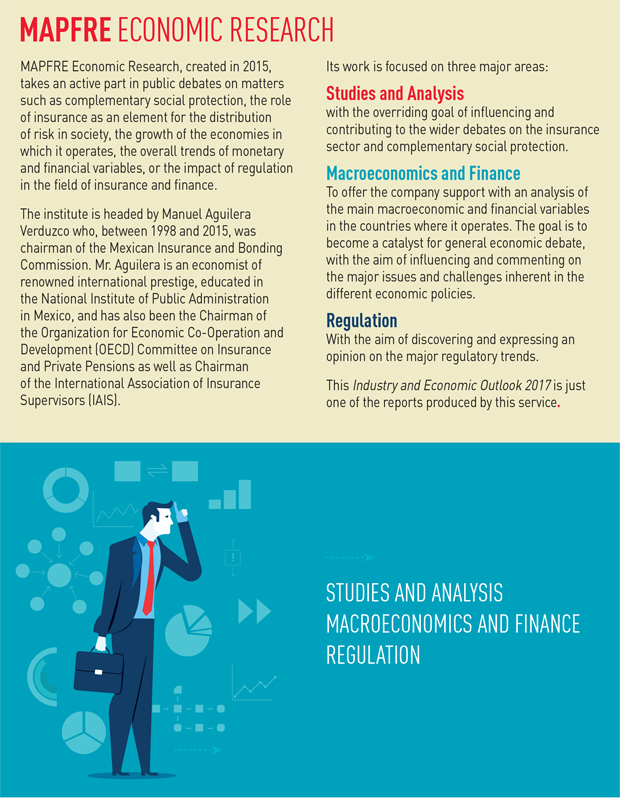 As for the insurance markets, the study predicts that the activity of the global industry will accelerate over the coming years, in line with the overall economic activity forecasts. The emerging markets will head this growth drive, given the existence of a significant insurance protection gap in these countries.

By areas, expectations for economic improvement in the Eurozone suggest a more favorable environment for the development of the insurance industry, especially the Non-Life and Life Risk market segments, highly correlated with the economic cycle.

In Spain, the greater dynamism of the residential sector could offset the expected moderation in consumption. It is therefore estimated that insurance premiums for Non-Life business may experience nominal growth rates above the average envisaged for the Eurozone countries. On the other hand, the persistence of the low interest rate environment continues to weigh on the Life-Savings and traditional life annuity market segment. However, the upsurge of the long-term risk-free interest rates may facilitate their commercialization, helped by the scant or zero return on bank deposits.

With regard to Turkey, the expected economic slowdown and the high degree of uncertainty arising from the domestic and geopolitical tensions could stifle the growth dynamics of the insurance business in the country.
In the United States it is estimated that the premiums for Non-Life business may experience growth in excess of 2.7 percent for the period 2017-2018, while the expected growth for the accident and health lines is 4.7 percent in 2017, rising to 5.1 percent in 2018. Likewise, the materialization of the gradual rises in long-term interest rates will favor the development of the Life-Savings and life annuity insurance segment.

In Brazil, the interest rates are currently below the 2016 minimums and continue their downward spiral, creating a complex environment for the development of Life-Savings and life annuity products. In addition, the characteristics of the expansionary monetary and fiscal policies could lead to a deterioration of the Real, with the consequent negative impact on the results of the insurance business, on being transferred to the cost structure.

In Mexico a panorama of weak growth and performance is anticipated for the Non-Life and Life Risk lines, although higher than the growth rate for economic activity as a whole. The forecast for the Life-Savings and life annuity line could be favorable, given the anticipated interest rate rises by the Central Bank and the prospects of sustaining a restrictive monetary policy. However, volatility remains high and this could have detrimental effects.

In China, on the other hand, it is estimated that the growth rates in the Non-Life insurance segment could reach double digits in the period 2017-2018, close to 20 percent. Moreover, the forecast implementation of monetary policies by the central bank, in an attempt to avoid further depreciation of its currency, paint a favorable picture for the Life-Savings and life annuity insurance businesses.

This Outlook report also conducts an analysis of the global regulatory trends, as well as those specifically related to the United States and the European Union. 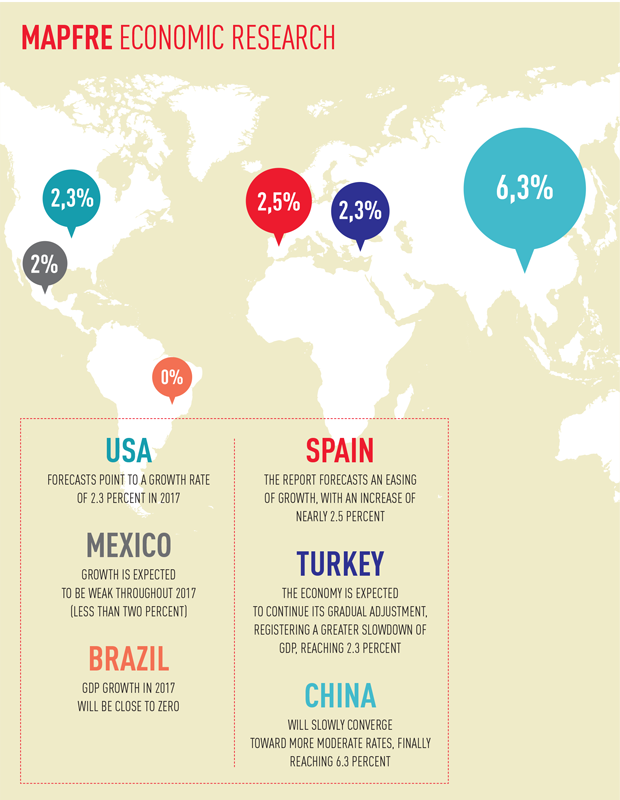