VERTI STARTS UP IN GERMANY 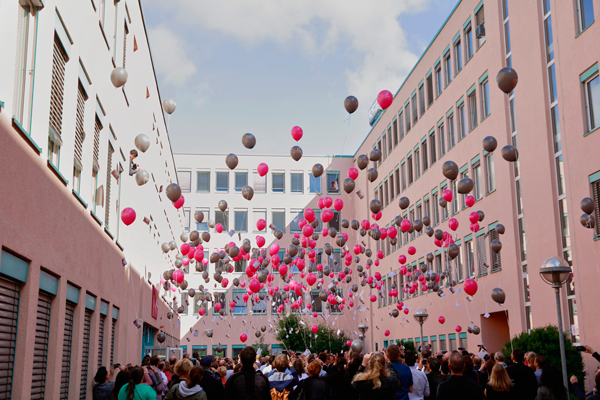 The launch of Verti in Germany was completed on June 14 and marked the start of the brand’s international expansion outside Spain. The goal is to extend an attractive, clearly differentiated value proposition for digital customers in a very large, competitive market. In Germany, the company operated to date under the Direct Line brand.

“We want to become the best direct insurance company in Germany – it’s as simple as that,” declared José Ramón Alegre, Verti’s CEO, at an informal event held with employees, to whom he explained the objectives and his vision of the new company’s future.

Carlos Nagore Archilla and Sven Herrmann, project manager and business analyst at Verti, respectively, joined him in marking the start of this new phase with a symbolic act during which the Direct Line banner was lowered and Verti’s hoisted. Since then, it has been fluttering on the headquarters façade on the outskirts of Berlin.

José Ramón Alegre thanked the 460-plus employees and collaborators for their hard work and commitment in recent months to make this launch of Verti in Germany possible. “I’m proud of you all one hundred percent. (…) You must realize that you’ve done an extraordinary job. I’m sure that we will enjoy a magnificent future with Verti,” he exclaimed.

During the celebration, colored balloons were released and a fun, modern after-work party was held, in line with the brand’s youthful image.

Verti, leader of online auto insurance sales in the Spanish market, will also be operating shortly in the USA – initially in the state of Pennsylvania, which the MAPFRE’s Chairman and CEO, Antonio Huertas, has already called “an exciting experience” – and, from 2018, in Italy. In 2016, Verti had a total of 250,000 policies in Spain and premium revenue came to 80 million euro.

A platform for “self-service”

Built using technologies that allow for a high degree of automation and accessibility for customers, Verti will enable our offering to be extended, providing an attractive value proposition to digital consumers who prefer the self-service approach.

Ever since its creation in 2011, Verti’s main added value lies in the experience and know-how it has contributed to the group from the development of the digital business. That strength, already taken advantage of by MAPFRE and now part of its management model, will enable significant growth to be achieved in this type of business in different parts of the world.

The group’s digital business rose by 23 percent in 2016, compared to the accumulated objective of 50 percent for the close of 2018. MAPFRE plans to surpass this goal thanks to Verti and InsureandGo, the latter being the world leader in the online distribution of travel insurance