Rate this post
On February 28, Barcelona once again hosted one of the most important events for the tech sector, the Mobile World Congress, which was attended this year by 60,000 people from all over the world. A delegation from MOi (MAPFRE Open Innovation), MAPFRE España, and Savia toured the pavilions of the Barcelona expo center to learn about the latest developments of startups, device manufacturers, and service providers, among others.
MAPFRE was especially focused on 4YFN (Four Years From Now), the Mobile World Congress’ satellite event where startups, investors, and large corporations—like MAPFRE, which has announced its call for the fourth edition of the insur_space program—meet to explore avenues for collaboration. In addition to having its own space to connect with the entrepreneurial ecosystem, the company also presented the MAPFRE Open Innovation (MOi) and Savia proposal to curious attendees, together with the Barcelona Health Hub (BHH), the city’s first tech association to promote innovation projects in the digital health field.

With the recent launch of thecall for startups and their health and wellness vertical, the teams unveiled their value proposition in this area and received interesting proposals that they decided to apply to the insur_space program, in search of potential collaborations.

With the recent launch of its call for startups and its health and well-being vertical, the teams shared their value proposition in the vertical and received interesting proposals that they decided to apply to the insur_space program, seeking potential collaborations.

The future of health thus received the attention it deserves in a context dominated by the concerns of citizens worldwide, in which the latest advances have the potential to restore optimism while making mental health a top priority.

Trends in the insurance field

On the first day of 4YFN, Pedro Díaz-Yuste, CEO of Savia and head of Digital Health at MAPFRE, participated in the panel organized by BHH, Digital Health Trends in Insurance, where he described the perfect storm that the arrival of COVID-19 meant for telemedicine and how MAPFRE decided to help by opening the platform not only to its clients, but also the general public, free of charge. Díaz-Yuste added that MAPFRE’s commitment to innovation through collaboration with startups that Savia has consolidated in the last three years is positive and important. In his opinion, three ingredients have contributed to the company’s success in this area: rapid integration, win-win relationships, and humility on everyone’s part.

All these proposals and innovative steps are necessary for transforming organizations. Mónica García Cristóbal, director of Transformation at MAPFRE España, participated in the second day of the event in a talk with Amazon Ads, where she shared her reflections on MAPFRE’s commitment to empathize with the customer and improve their experience. Joined by Germán Martínez, Managing Director of Amazon Ads in Spain, she discussed the acceleration of trends in organizations after the pandemic and their commitment to responding to and anticipating customers’ needs no matter where they are.

The important thing is to establish strong and lasting relationships of trust with customers. “We care about families … and young people,” she emphasized. “We must identify their tastes and preferences and find out what they need… That’s why we’ll be present on channels they use, such as Amazon and Twitch,” she explained. 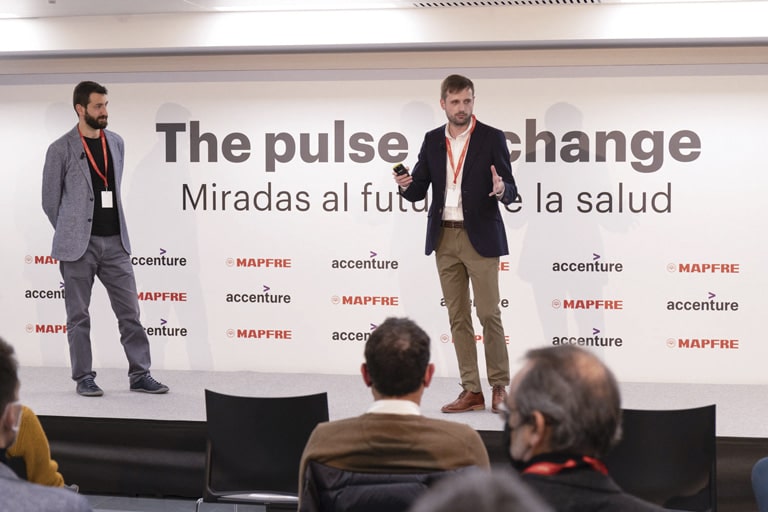 After a demanding day at the MWC, a special moment was set aside to go up to the top floor of MAPFRE Tower, with views of the sea, nature, and the city, to broaden our perspectives on the future of health.

Along with Accenture, MAPFRE held ”The pulse of change: Perspectives on the future of health,” where researchers, startups, investors, and disseminators discussed advances and trends for the coming years.

The event was opened by Joan Cuscó, global head of Transformation at MAPFRE, and Elie AbiLahoud, director of Venturing and Innovation for Accenture in Europe, and it featured exceptional presentations, a Q&A session, an interview, and a colloquium.

Nicolas Monsarrat, Head of Digital Health for Accenture in Europe, outlined the region’s dynamic health trends, marked by the rapid expansion of digital health, where a 29.6% rise in growth is expected between 2019 and 2023.

Coinciding with World Rare Disease Day, Lluis Montoliu, biologist and researcher in the CSIC and CIBER at the Spanish National Centre for Biotechnology (CNB), discussed advances in genetics and the achievements and challenges of personalized precision medicine to treat patients individually. He also spoke of advances in gene editing tools such as CRISPR and the importance of scientific integrity, among other topics.

During his talk, which the audience followed with great interest, Lluis Montoliu shared how technology has accelerated and improved his work methods: “In the late 1990s we sequenced the genome for the first time. Back then it might have taken me two and a half years to inactivate a gene; now it takes me a few weeks,” said the expert, in the case of rare diseases such as albinism. He also claimed that artificial intelligence, data use, and supercomputing would revolutionize the sector.

Montoliu explained that the current challenges are global, but the solutions differ depending on the region.

Later, a colloquium was held by moderator Luisa Bautista, director of Health for Accenture in the Iberian Peninsula, called Fireside chat: Accelerating change. In it, Pedro Díaz Yuste explained that patient-centered strategies would be among the keys to digital health, and this is what Savia did by providing telemedicine service free of charge to all users during the pandemic. Pedro announced that Savia “is going to play an important role” and that telemedicine is already a reality in the world of health.

Miquel A. Bru Angelats, vice president of Business Development at Made of Genes, spoke about the two-way path that personalized medicine will take and the importance of involving the customer directly. Citizens must be empowered so that they are the ones who decide to share their data in order to improve their health, which can help further the study of diseases and their subsequent treatment, he said.

Luis Martín Ezama, CEO of CancerAppy, a startup dedicated to detecting the patterns behind different types of cancer through computing, discussed one of the biggest obstacles to research advancement: limited data. In the midst of the information age, data is an essential source of solutions to the problems we face, and this is a major challenge that will have to be addressed in the short term.

The MWC was an opportunity for MAPFRE to make advances in an innovative and enriching ecosystem, and it rounded off the experience with an early presentation, during the private event, of the report: The Future of Health: Five Trends That Will Impact the Insurance Market, prepared in collaboration with Accenture. 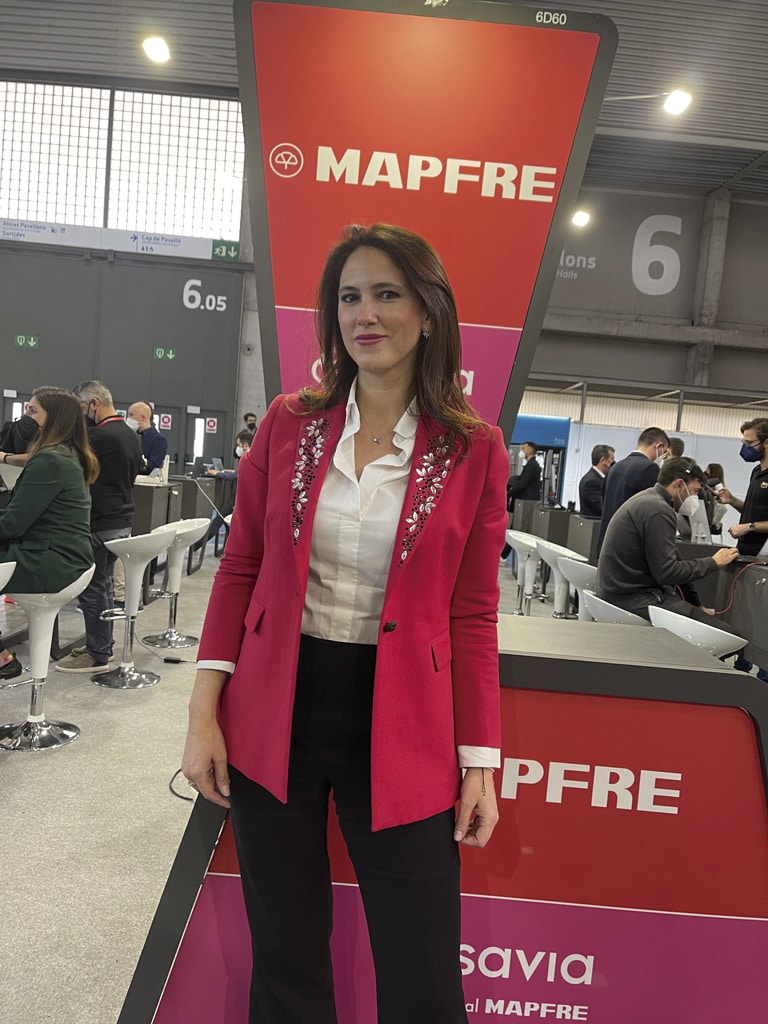 This study details the trends that will shape the future of health, trends that are a consequence of not only the pandemic but also the tensions in the health system that are driving the digitalization of the sector, as well as the interests of health groups, insurers, pharmaceuticals, and medical device manufacturers in response to up-and-coming players: startups and digital giants.

What are these important trends? More and more actors that are in a race to conquer the sector; interoperability, a cornerstone of the patient experience; empowering users, who must also decide what to do with their data; personalization through technologies that will lead to individualized, precision medicine, and the phenomenon of “home-spitals,”where health is brought into the home.

The future of health thus received the attention it deserves in a context dominated by the concerns of citizens worldwide, in which the latest advances have the potential to restore optimism while making mental health a top priority.

Looking to the future, MAPFRE aims to keep the conversation open and have its finger on the pulse of tomorrow’s health.